As I sit here tonight thinking over the past few weeks of Lent, it’s the first time I’ve ever wondered where it went.  When Easter is so early in the year, it seems that Lent passes very quickly.  It’s hard for me to believe that my little ones were doing everything in their power to suppress the urge to have a fencing battle right in the middle of the consecration this morning during Mass when it feels as if they were dodging Father with the ashes just yesterday.

As I do every year, I began this Lent thinking I would do it all differently.  I wouldn’t care if I didn’t lose any weight from my fasting (because I would remind myself that wasn’t the point).  I wouldn’t be so set on fixing all of me with twelve different things I needed to work on this year… instead I would choose one and really focus, not giving up under the weight of being overwhelmed.  I wouldn’t get so caught up in it all that my end focus would be me, me, me instead of Him, Him, Him as it had typically ended in the past.

But, you now what?  I sit here tonight three pounds heavier even after giving up sugar, breakfast and fasting on Fridays.  What started with a deeper commitment to prayer ended up as reciting two prayers every morning, reading a devotion to His Diving Mercy, a parenting book, a daily devotional and my Bible.  My desire to think about others more and offer my days for their intentions became a complete focus on myself, how I was failing and a reversion back into the world of social media when I teetered with giving that up as well.

See, after thirty-four years you would think that I might see the results of this year after year and finally do something different.  But, I’m stubborn.  And, I don’t always learn.

This year, however, I think I have.  I’m heavier.  I’m no more patient.  I’m no less selfish.  I’m no more well-read.  And, I still need a world of help in the area of prayer.  But, there is one thing I finally am…aware.  God didn’t necessarily want the extra food I didn’t eat.  He didn’t care that I wanted to become a prayer expert by today when I wasn’t even that great of a beginner forty days ago.  And, I don’t really think He was too impressed with my failed attempt to limit my social media presence.

Instead, I think He just might have a smirk on His face as he shakes His head wondering what took me so long to truly admit that I. Need. Him.

What He needs is for me to let him have everything…my heart and my soul for His will.

So, this week, I will make sacrifices, but finally (with much grace and prayer) they won’t be for me.  I will shut it off in order to focus on the Passion of His only Son.  I will let it all go, offering what I can in hopes of growing closer to Him, and doing that alone.  Because, I do believe that our sacrifices matter.  I know we can unite our suffering to His.  And, I think He rewards our attempts to belong ever more to Him, even if we fail as often as we succeed.

I will retreat from the world and what I convince myself to be important to focus on what truly is… my vocation as a wife, mother and daughter of His.

Then, and only then, will I be able to see this week for what it is…an offering of a parent’s child, one who knew no sin…His life for ours…lives saturated with stain upon stain of sin. This Holy Week, this way of the Cross, can serve to open our eyes and hearts to His unending mercy if we let it.  He allowed the death of his only Son, his innocent Son, for our guilt.  He allowed the mocking, the torture, and the nails to pierce His hands and feet as a crown of thorns sent blood running down his face for one thing…our salvation.

For it is all that matters. 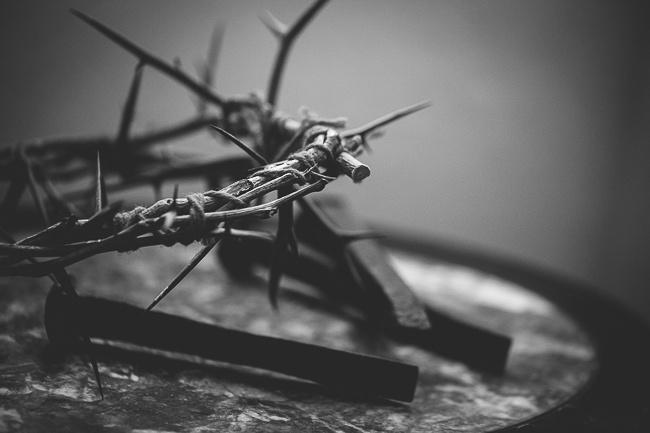 Britt is a momma to four and a wife to one, raising cattle on the grasslands of New Mexico.